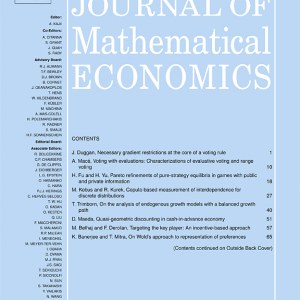 Houba, H., Li, D. and Wen, Q. (2021). Bargaining with costly competition for the right to propose Journal of Mathematical Economics, :.

We study a bargaining model in which players compete for the right to propose in every period, hence the bargaining protocol is determined endogenously. This model admits multiple equilibria, including many with delayed agreements and costly competition. We develop a general self-generating technique to characterize the extreme equilibria, and hence, the entire set of equilibrium payoffs. Our technique resembles an optimal contract design problem with all the sequential rationality conditions being treated as the incentive constraints. By means of an example, we show that as the discount factor goes to one, a player could obtain almost the entire surplus in his best equilibrium, while players{\textquoteright} competition efforts diminish to zero. We also find that some asymmetric equilibria are more efficient than the stationary equilibrium.