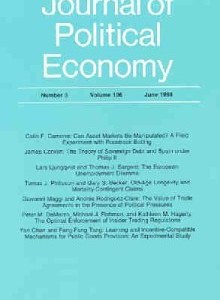 In a democracy, a political majority can influence both the corporate governance structure and the return to human and financial capital. We argue that when financial wealth is sufficiently concentrated, there is political support for high labor rents and a strong governance role for banks or large investors. The model is consistent with the 'great reversal' phenomenon in the first half of the twentieth century. We offer evidence that in several financially developed countries a financially weakened middle class became concerned about labor income risk associated with free markets and supported a more corporatist financial system.